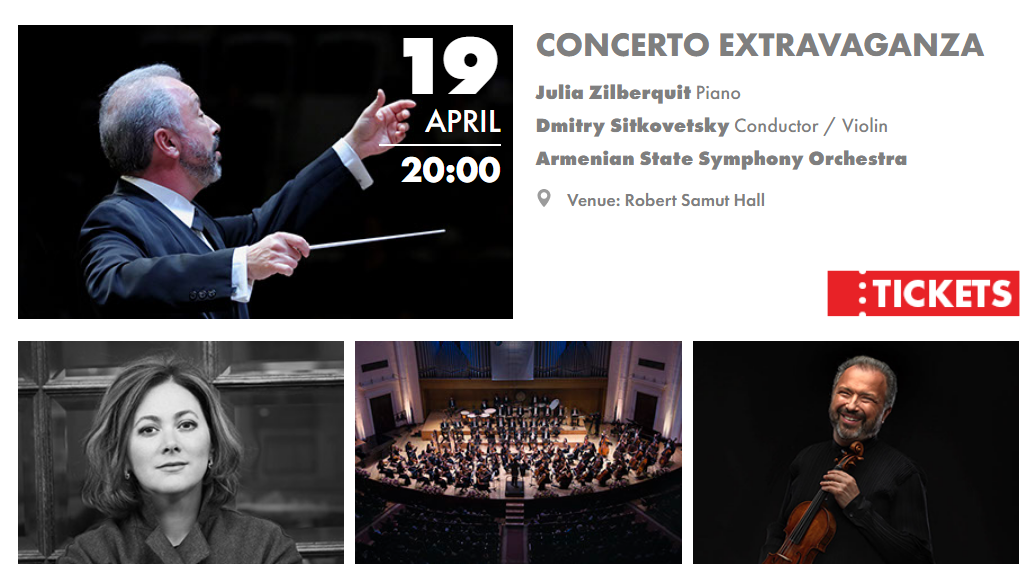 Concerto Extravaganza, featuring well-known russian-born pianist, Julia Zilberquit, to be premiered in Malta with the Armenian State Symphony Orchestra under the baton of internationally acclaimed conductor and virtuoso violinist Dmitry Sitkovetsky. The concert includes transcriptions of the music by Vivaldi made by Bach and contemporary composer Alexey Shor. “The Four Seasons by Vivaldi have definitely enjoyed everlasting popularity,” said Mr. Sitkovetsky. “Haydn, Glazunov, Tchaikovsky, Piazzolla, Desyatnikov were referring to them. There is some fascinating attraction in the change of seasons. This is something we all see and it affects us, especially creative people. These concerti enclose an enormous philosophical generalization; the Four Seasons symbolize a life cycle, which consists of awakening, flourishing, fading and death. I am sure that the changing climate and shifting seasons will continue inspiring composers to interpretations.”

“One of the goals that I’d set for yourself as a musician was to broaden the piano repertoire,” said Julia Zilberquit about her Vivaldi/Bach adaptation for orchestra. “Vivaldi wrote so many concertos for violin and other instruments, but nothing for piano or harpsichord. Later on, Bach did many transcriptions of his own concertos from one instrument to another, and also of concertos by Vivaldi and Corelli, which he transcribed for organ. I wanted to preserve as much as I could, so almost all of the original Vivaldi orchestration is there. In fact there’s more Vivaldi in it than Bach, that’s why I refer to it as Vivaldi/Bach not Bach/Vivaldi. It’s a beautifully thought-out programme: We’ll be starting out with something Italian — Ottorino Respighi’s Italiana from the Suite No.3 “Ancient Airs and Dances” for Strings, then on to Shor’s Four Seasons, which are being combined with Vivaldi’s Four seasons, and which we’re also tying to the Vivaldi/Bach concertos.”

Ottorino Respighi
Italiana from the Suite No.3
“Ancient Airs and Dances” for Strings
Alexey Shor
Four Seasons of Manhattan for Violin and String Orchestra

III Allegro (arranged for piano and orchestra by Julia Zilberquit)

III Allegro (arranged for piano and orchestra by Julia Zilberquit)