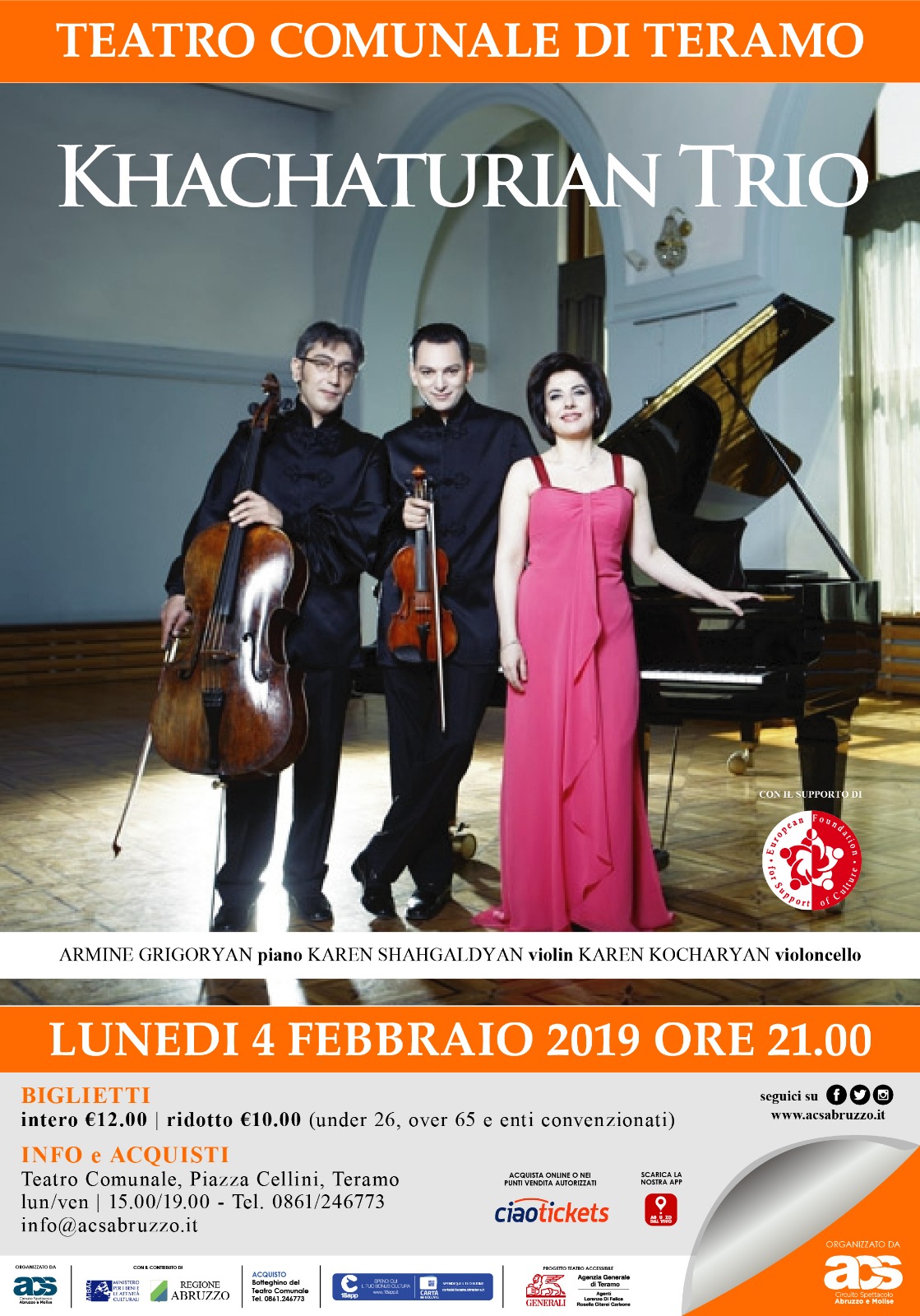 2018 marked the 115th anniversary of the world-famous composer Aram Khachaturian. To celebrate the momentous event, the European Foundation for Support of Culture and Italy’s Art Ensemble association  organized an Italian tour by Armenia’s Khachaturian Trio in early February 2019; the Trio  performed the maestro’s most popular works.

Aram Khachaturian is a world-famous Soviet composer of Armenian origin, author of the ballets Spartacusand Gayane, and of the Masqueradesuite.

Aram Khachaturian was born in 1903 to an Armenian family living in Tiflis (today’s Tbilisi). Folk songs sung by his parents were among his earliest impressions. Since early childhood, Aram Khachaturian attempted to reproduce the tunes he heard at home and in the streets and his first works have clearly folk motifs.

In December 1942, the ballet Gayane premiered to resounding success. It emerged from the first Armenian ballet Happiness,which Khachaturian decided to revise. Many critics believe Gayane to be the highest achievement of contemporary symphonic music, while the “Sabre Dance” is its most famous fragment.

Aram Khachaturian often acted as conductor, toured with his works extensively both in the USSR and abroad, and always with great success. The maestro was a Professor at the Moscow State Conservatoire and the Gnesin Institute (Russia), academician of the Armenian Academy of Sciences, Doctor of Arts, Honorary Member of the National Academy of St Cecilia(Italy), corresponding member of the Academy of Arts in Berlin (Germany), Honorary Professor of the National Conservatory of Music(Mexico), and the Honorary Member of the Michoacan University of Saint Nicholas of Hidalgo(Mexico).

The commemorative anniversary tour of Italy was launched by a concert on 3 February in Marrucino (Chieti), Italy’s oldest theatre, which celebrated its bicentennial in 2018. On 4 February, the Khachaturian Trio  performed at the Comunale Theatre in Teramo, on 5 February at the San Giovanni Theatre in Pescara and, on 6 February, in the town of L’Aquila at the “Casella” Conservatoire. The tour  concluded on 7 February on the second stage of the Maria Caniglia Theatre in Sulmona.