In 2019, the Khachaturian Trio, one of the world’s most popular trios,  has celebrated its 20th anniversary. To mark this occasion, th 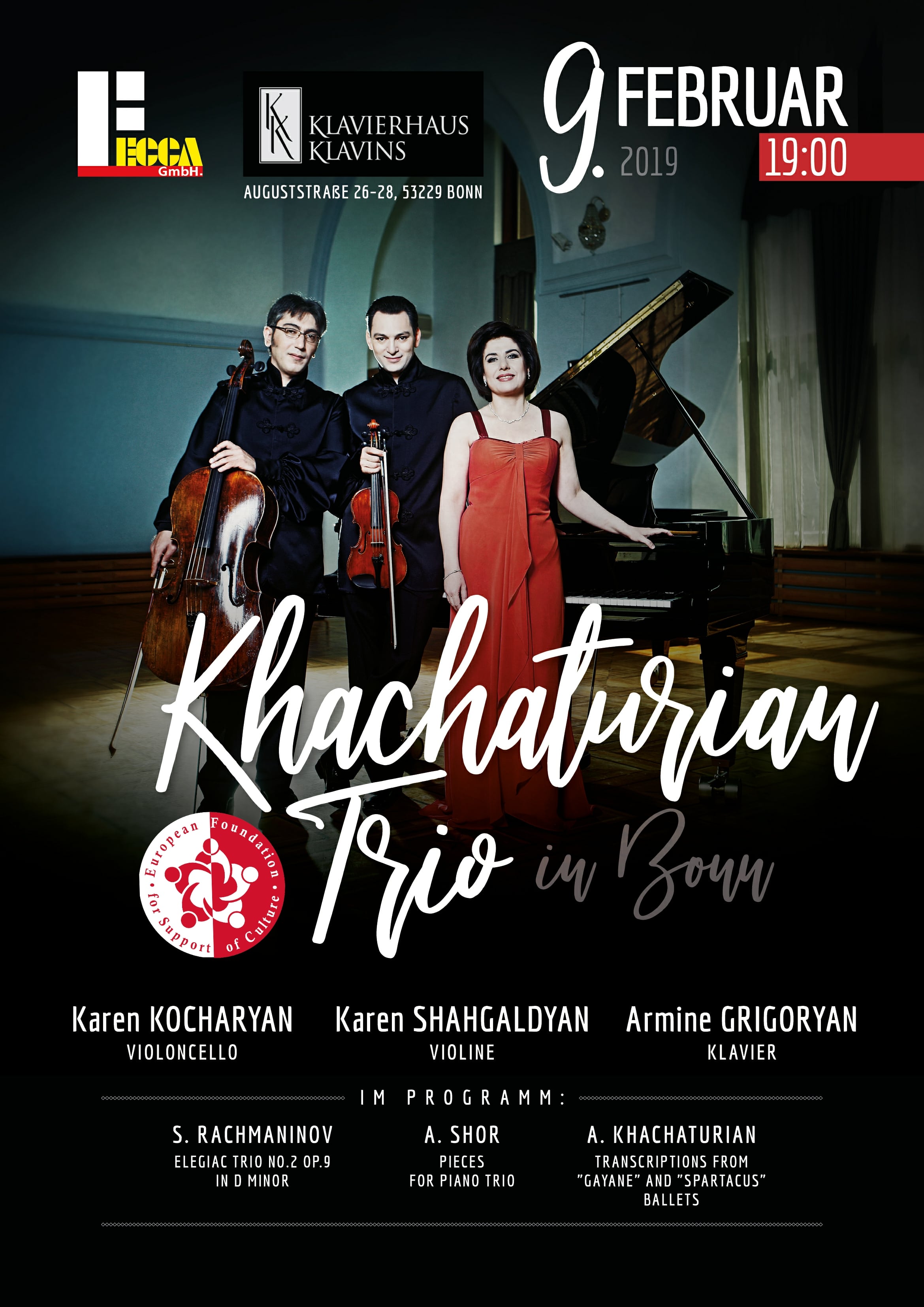 e Trio went on an anniversary tour of Europe. The inaugural concert was  held on 9 February in Klavierhaus Klavins (Bonn, Germany). The event was organised by the European Foundation for Support of Culture and the European Centre for Culture and Arts(Germany).

The Khachaturian Trio started out as the Arsika trio in 1999. The ensemble toured the US, Switzerland, Central and South America, Canada, the UK, Germany, Austria, Japan, Australia, China, Malta, Latvia, the Czech Republic, Russia and other countries. They have performed at such famous halls as Musikverein in Vienna, Gewandhaus in Leipzig, Gasteig-Philharmonie in Munich, Suntory Hall in Tokyo, Koerner Hall in Toronto; they also participated in many music forums, including the Malta International Music Festival. The Trio’s performances were repeatedly broadcast on the radio and on TV. The ensemble recorded nine CDs of Armenian and Russian music, including a CD of works by Khachaturian and Malta’s Alexey Shor released by Sony, a double CD featuring Khachaturian’s chamber music, a CD of Alexander Arutyunyan’s music, Tchaikovsky’s trio, Arensky (D-minor), Babadjanyan, Shostakovich (E-minor), CDs with masterpieces of Armenian classical music and a disc with contemporary Armenian trios (Adjemyan, Babayan, Chaushyan).

Music critics note their virtuoso performances, true musicality and sense of style. Since 2006, the Trio has performed in its present lineup: Armine Grigoryan, piano, Karen Shakhgaldyan, violin, and Karen Kocharyan, cello. The ensemble is actively engaged in educational activities in Armenia, performing in both the capital and the regions and giving master classes for school and university students. The Trio tours extensively and has been giving about 70 concerts per season for the last few years.

In 2008, the trio renamed itself the Khachaturian Trio in honour of outstanding Armenian composer Aram Khachaturian.