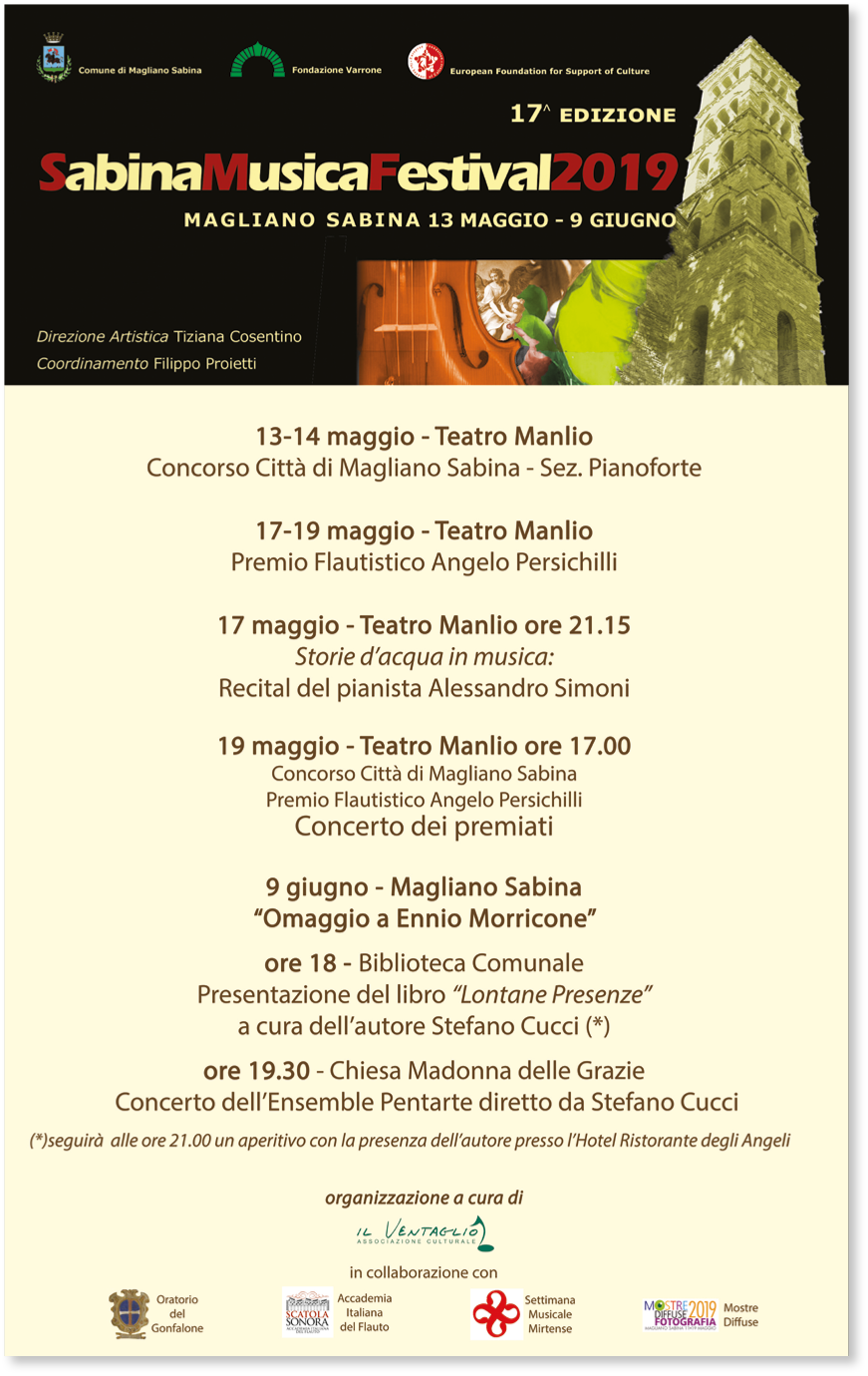 In May and June, Il Ventaglio Italian Culture Association, the City Hall of Magliano Sabina (Rieti Province in the Lazio Region) and the European Foundation for Support of Culture held  the 7th SabinaMusicaFestival  hosted by the best music venues.

Lazio is a region in central Italy. It was named Lazio (derived from the Latin Latium) even before the Roman Empire was founded; it had been populated by Latins, or Latians, living along the lower reaches of the Tiber.

Every year, Lazio holds many diverse cultural events. For instance, the communes of Viterbo, Caprarola, Bagnoregio, Bagnaia, Sutri and Ronciglione hold the Tuscia Jazz Festival, second only to Umbria Jazz held in Perugia. The festival is attended by jazz musicians from around the world, particularly from the US. Since 2006, the international film Festival Internazionale del Film di Roma is held every autumn in Rome. Since 1999, the city of Latina has organised the International Circus Festival (Festival internazionale del circo città di Latina), one of the world’s most important circus festivals.

On 13–19 May, SabinaMusicaFestival at the Theatre Manlio  featured the Citta di Magliano Sabina Piano Competition. Its panel of judges  included Italy’s leading pedagogues, such as Maria Teresa Carunchio, Professor at the L. Cherubini Conservatorio, Florence; Lucio Perotti, Professor of Accademia Europea Musicale M.A.N.T.; Giuliano Mazzoccante, Professor at the G. Braga Conservatoire, Teramo (Italy), and many others. Tiziana Cosentino, Professor at the Conservatoire of Music in Avellino,  served as the artistic director of the piano competition.

Three winners of the Citta di Magliano Sabina Piano Competition will also participate free of charge in the “In Musica” International Competition in Rome to be held in 2020 as part of the 14 Ways to Malta series. On 19 May 2019, the musicians also performed together with world-famous classical artists.

The project  featured concerts performed by Italy’s most renowned orchestras. It  also included a concert in honour of Ennio Morricone, a Mostre Diffuse photo exhibition accompanied by a musical performance, and many other events.