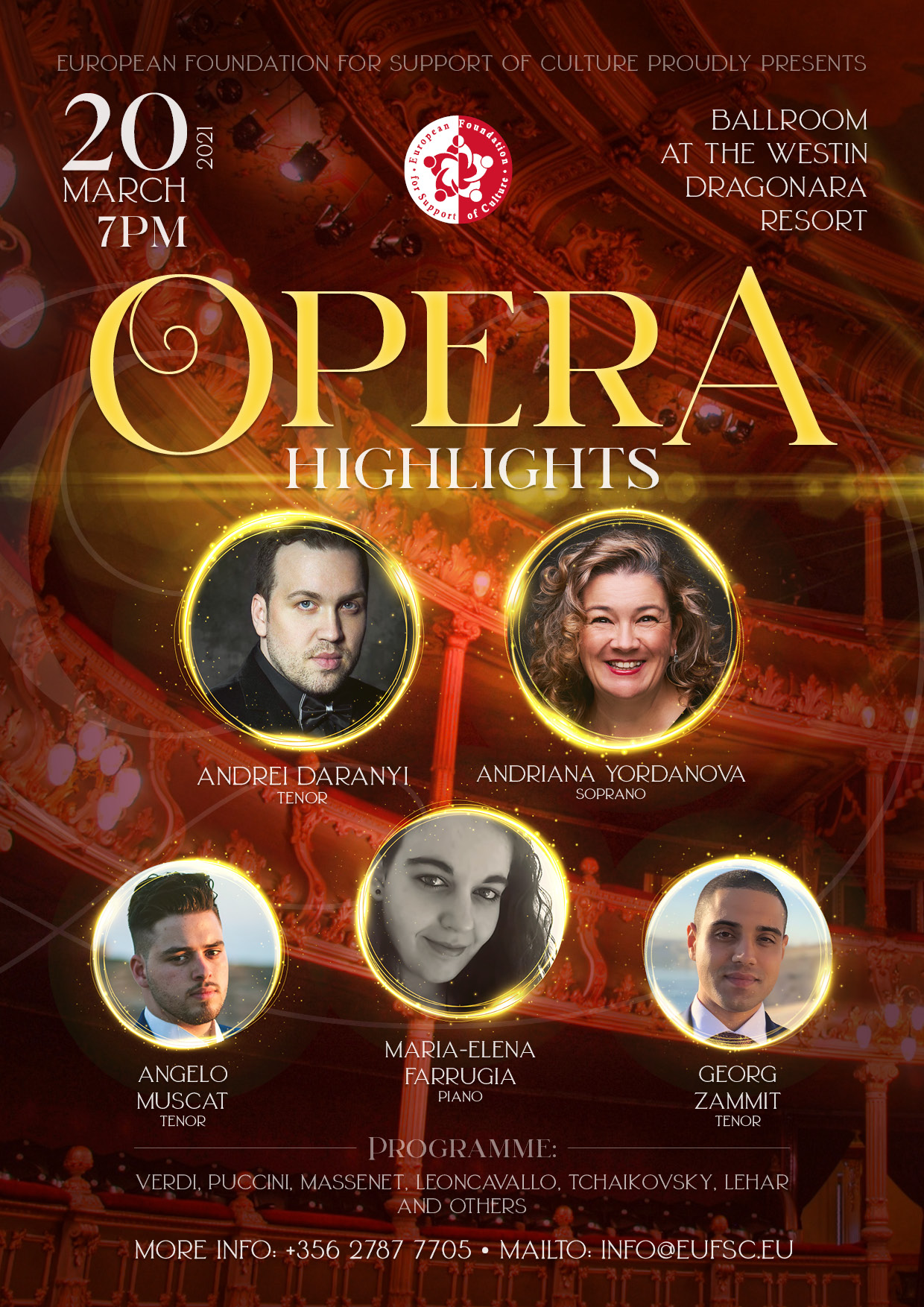 This March, Bulgarian-Maltese soprano Andriana Fenech Yordanova will perform a concert entitled ‘Opera Highlights’, with tenor Andrei Daranyi and pianist Maria-Elena Farrugia at the Ball room of the Westin Dragonara Resort, St Julian’s. Also featured will be the two young tenors and students of Fenech Yordanova from the Malta School of Music, Angelo Muscat and Georg Zammit.

The concert features a programme of works in the Lyric Opera tradition, including pieces by Verdi, Puccini, Massenet, Leoncavallo, Tchaikovsky, Lehar and others. The event features Andriana Fenech Yordanova, a soprano originally from Bulgaria, who, since 2001 has made Malta her second home. Also featured is Romanian tenor Andrei Daranyi and Maltese pianist Maria-Elena Farrugia.

Andriana Fenech Yordanova has considerable performance experience in addition to her varying educational activities, her past outings including concerts performed under the auspices of the H.E. The President of Malta and the Hon. Prime Minister of Malta, as well as numerous appearances abroad including at the Sofia Music Weeks Festival in 2019. She has performed with noted conductors including Brian Schembri, Michael Laus, Damiano Binetti, Alexey Nyaga, Christopher Muscat, Colin Attard, Franchesco Falci, Alexey Galea Cavallazzi, and Wayne Marshall among others. Making her debut in Puccini’s La Boheme at Bourgas Opera Theatre in 1995, she followed this playing the role of Fiordiligi in Mozart’s Cosi fan tutte the next year at the Varna Opera House, and in 2019 was nominated for a Crystal Lyre Award in Bulgaria.

The rehearsal for the concert will be filmed for release on TVM, with viewers treated to an inside look at the creative process behind this intriguing concert offering, as well as including interviews and previews of the works featured in the performance.