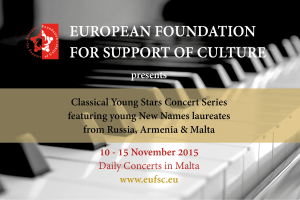 Very young but already well-known musicians from “New Names Russia Foundation” (under the direction of the President of the Foundation Denis Matsuev – pianist, People’s Artist of Russia, Honorary Professor of Moscow State University, Honored Artist of Russia and the head of The Public Council under The Ministry of Culture of the Russian Federation) and young talents from the Foundation “New Names Armenia” (under the patronage of the First Lady of Armenia – Rita Sargsyan) will perform a concert series in Malta under the Distinguished Patronage of Her Excellency Marie-Louise Coleiro Preca, President of Malta, between 10th and 15th November 2015. The concert series will also feature talented Maltese musicians under 16 years of age, winners of New Names Malta – National Music Competition which will take place between 6-8 November 2015. Details about participation in this competition are available on www.newnamesmalta.com.

Concert series are organized with the support of the Ambassador of Russian Federation in Malta and Russian Center for Science and Culture in Malta.

The full programmes will be announced in October.

The Event will feature eight talented young musicians, winners of “New Names” Russia and Armenia”, four participants from each country, who will perform a number of classical music concerts held in the leading venues of Malta. We are aware that there will be a National Competition organized by the New Names Malta Foundation who will be doing the selection process of Maltese talented children. We have agreed on collaboration and invited the winners of the competition to share the stage with the other children.

The 6 Maltese youngsters will be able to showcase their talents, mix with other kids with similar abilities and interests but coming from different countries which may bring other exposures and enrich Maltese children’s experiences. Being able to expose themselves to general public, these young locals will motivate other children to follow their suit and engage themselves in music. The latest, in their turn, may become interested to participate in the Tour next year.

Foreign participants will have yet another fantastic opportunity to experience new venues, new audience, make new connections and enrich their overall performers’ skills.

All the parties, be it Maltese and foreign participants, EFSC and local lovers of music and arts will enrich their experiences and deepen their knowledge by participating in or attending the series of concerts during the Tour.

By preparing to take part in such a cultural project like our concert series, all applicants will show their best achievements in the field of classical music, thus developing their skills, knowledge and understanding of arts. 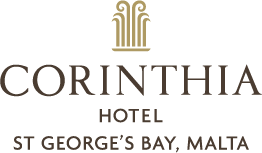 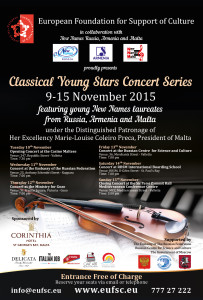 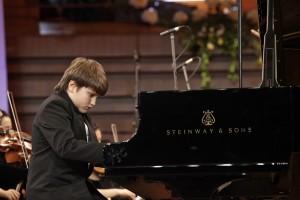 Vladimir Ivanov was born on 18th May 2002 in Moscow into a musical family. He started to learn music at the age of 5 and had his piano lessons under the guidance of Olga Mechetina, the Honored teacher of Russia, at the Children’s Music School of the Moscow State Conservatory named after P. I. Tchaikovsky.

There he made a significant progress and eventually became a laureate of numerous international music festivals such as Castelfranco (Italy, 2009), Acre (Israel, 2010), International Competition for Young Pianists “Diamond Music” (Moscow, 2011), «Astana Piano Passion» (Astana, Kazakhstan, 2013). He participated in the International television competition of young performers “The Nutcracker” (Moscow, 2012).  In 2012, he gave a recital at “Russian Seasons” in Nice (France).

Vladimir Ivanov was awarded a laureate and scholar of the New Names Russia Foundation and a participant in concert programs of the Vladimir Spivakov’s Foundation. 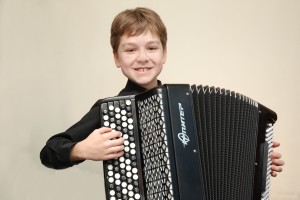 Rostislav Mudritsky was born in the city of Spassk-Dalniy of Primorsky Krai, Russia. At the age of six he started learning music at the Children’s Art School in Moscow. Despite his very tender age, Rostislav has already won many prestigious Russian and international competitions and festivals and also performs at various concerts in Moscow and other cities in Russia.

At the age of 6 he became a laureate and scholar of the New Names Russia Foundation. 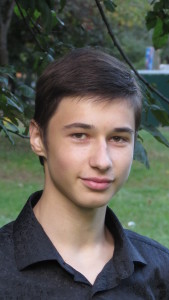 Ilya Mikhailov was born on 2nd December 1999 in Moscow. In 2006, he started to attend cello lessons at the Children’s music school named after Artobolevskaya, studying in class of Honorary Worker of Culture of Moscow Nina Sharovka. Since 2011 Ilya has been attending classes Honored Artist of Russia and Professor Alexei Seleznev.

His dedicated studies resulted in achieving numerous awards of various festivals and competitions.

Ilya has performed in a number of prestigious Moscow concert halls, namely the Malyi and Rachmaninov’s halls of the Moscow State Conservatory named after P.I. Tchaikovsky, concert hall of Gnesin’s Academy of music and others. He is gifted with musicality, is energetic and willing to perform on a big stage. During performances he feels comfortable and self-confident. 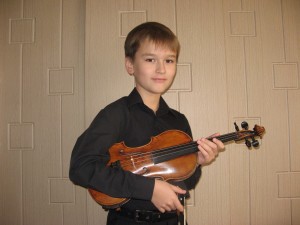 Mikhail Usov has excellent musical attainments. Despite his young age, he is gifted with a special sensitivity to sound. He has also distinguished himself as a virtuoso and demonstrated strong scene will.

Mikhail is a Scholar of the Moscow Government as well as of a number of International Charity Foundations of Yuri Rozum, Vladimir Spivakov and The New Names. He is a regular performer in Moscow, other cities of Russia and also gives concerts abroad. 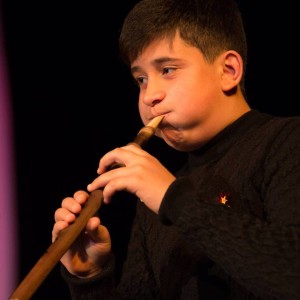 Gagik Hakobyan was born in 2002 in the city of Yerevan. He gratuated from the Yerevan Music School named after Armen Tigranyan in 2014 where he learnt piano. At present he attends a class of duduk at the Yerevan Special Music School named after Alexander Spendiaryan. Being a member of the school’s folk instruments orchestra he became a laureate of Renaissance International Contest and Festival in Gyumri in 2014, winning the 1st prize.

In 2012 – 2013 Gagik performed with the Folk Instruments Orchestra of Yerevan at the Children State Philharmony named after Yuri Bakhshiyan.

In 2014 Gagik was awarded with a scholarship of the New Names of Armenia Foundation. Within the framework of this program he toured Bulgaria performing with Sofia AGBU Chamber Orchestra under baton of Bedros Papazian in 2015 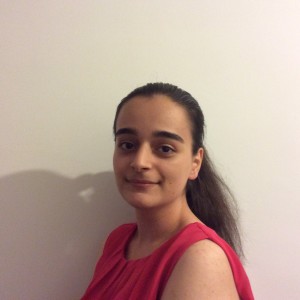 Astghik Ghukasyan was born in 1998 in the city of Yerevan. At present she attends the piano class of the Professor Shushanik Babayan at the Yerevan Secondary special music school named after P.I. Tchaikovsky. 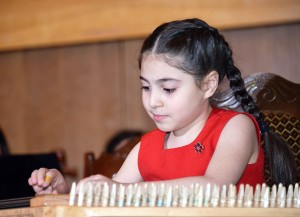 Meri Musinyan was born in 2006 in the city of Yerevan. Since 2012 she has been learning kanon in the class of the Professor Tsovinar Hovhannisyan at the Yerevan special music school named after Alexander Spendiaryan.

In 2014 Meri participated in 6th Renaissance International Contest and Festival in Gyumri in 2014 and was awarded with the diploma.

Since 2014 Meri has been a scholar of the New Names Armenia program and as a part of its framework she toured in US and Spain.

Meri also participated in the New Names 5th International festival of young musicians (Yerevan, 2015). She has performed with the National Chamber Orchestra of Armenia. 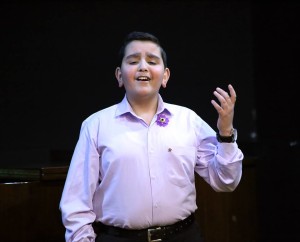 Narek Baldryan was born in 2002 in the city of Yerevan. Since 2009 he has been attending the Yerevan Art School named after Mikael Maluntsyan learning classic vocals with Mariam Mnatsakanyan, piano with Armenuhi Gharibyan and clarinet with Arsen Zakaryan.

Since 2011 Narek has been following the New Names Armenia’s program and within its framework he toured in France, US and Spain.

Narek participated in the 4th and 5th  New Names International festivals of young musicians (Yerevan, 2014 – 2015). He has also performed with the National Chamber Orchestra of Armenia.