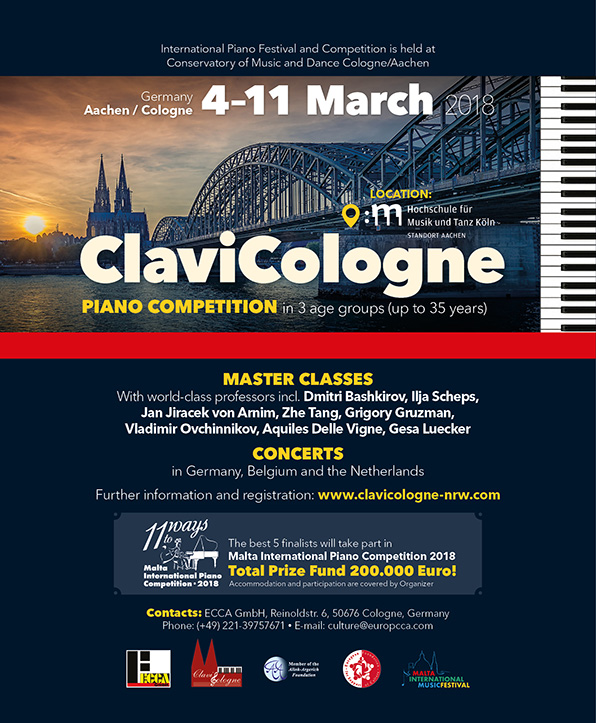 Between 4 and 11 March, the European Foundation
for Support of Culture, together with the Cologne
University of Music and Dance, will be holding
“ClaviColognе’, the 5th annual International Piano
Festival, in the most prestigious concert halls of
Germany, Holland and Belgium. It is noteworthy than
since the inception of the festival and competition,
young talented pianists from 56 countries have taken
part in the competition!
During the festival, a piano competition will be held
and master classes will be conducted by professors from
leading world conservatoires. In addition, performances
will be given by both known musicians and young
artists and the attendees of master classes.
Over the years from the moment when the festival
started, young musicians have been fortunate enough
to take lessons from such world-renowned pedagogues
such as Dmitry Bashkirov (Spain), Andrea Bonatta
(Italy), Pavel Gililov (Austria), Jacques Rouvier (France),
Matti Raekallio (Finland), Nina Tichman (U.S.A.),
Grigory Gruzman (Germany), Vladimir Ovchinnikov
(Russia) and many others.
In line with tradition, concerts of the festival are held
in such prestigious halls as the Beethoven Halle in
Bonn, Cologne Philharmonic Hall and Studio Dumont
in Cologne, Anton Rubinstein Music Academy and
Robert-Schumann-Saal in Dusseldorf, and Orchestra
Centre in Dortmund, as well as in the embassies and
consulates of various nations.
In concerts at the festival and during the competition,
works written by prominent Maltese composers such as
Joseph Vella, Alexey Shor, Karl Fiorini and others, will
be performed.