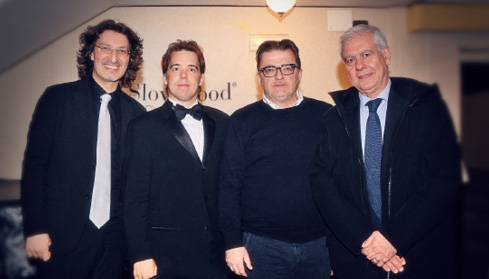 On 17 February, the European Foundation for Support of Culture and the Art Ensemble association (Italy) presented a concert “Mozart Evening” by Ingolf Wunder, famous Austrian pianist and Deutsche Grammophon artist. His performance was part of the anniversary concert series celebrating the bicentennial of the Marrucino Teatro in Chieti (Italy).

Born in Klagenfurt in 1985,Ingolf Wunder began taking violin lessons at the age of four. Ten years later, he switched to the piano and began his studies at the Linz Conservatoire, continuing his education at the University of Music in Vienna.

In 2010, at the International Chopin Piano Competition in Warsaw, Wunder won second prize, several special prizes and the love of many devoted music lovers throughout the world.In addition, to improve his concert performance on tour and to expand his musical horizons, he began to study conducting.

He has recorded four CDs for Deutsche Grammophon and performs at the world’s best concert halls in Europe, Asia and both Americas.

The concert on 17 February  featured the most popular works by Wolfgang Amadeus Mozart as well as pieces by other famous European composers such as “Travel Notebook” by the contemporary American-Maltese composer Alexey Shor. Ingolf Wunder  performed the suite at such renowned venues as Carnegie Hall (USA), Musikverein (Austria), Moscow State Conservatoire (Russia) and many others.