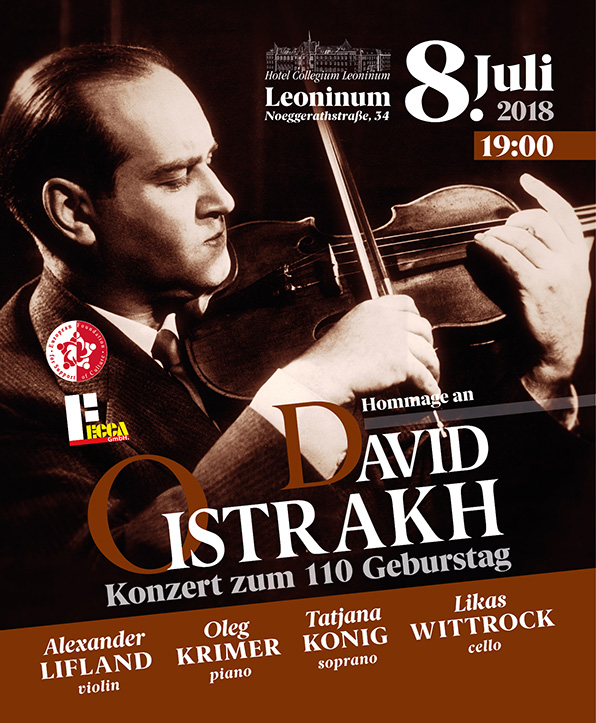 The 30th of September was the 110th Birthday of the outstanding Soviet violinist, conductor and teacher David Oistrakh. In honour of this remarkable event the European Foundation for Support of Culture, together with the European Centre of Culture and Arts (Germany), organized a celebration concert that took place in Germany.
David Oistrakh is one of the brightest representatives of the Soviet violin school. His exceptional performance was distinctive for its virtuosity, technical mastery and bright and warm sound. His repertoire included classical and romantic compositions (Beethoven’s violin sonatas by David Oistrakh and pianist Lev Oborin have been recognized one of the best interpretations of these works), but he also played music of contemporary composers with great enthusiasm, for example, the seldom performed Hindemith’s violin concerto. Oistrakh was an established conductor and in this role he performed on the best stages of the world.
The concert in memory of the great musician was held in Bonn, in the Leoninum Hall, one of the most famous concert halls of the region. Soloists of the anniversary concert: the laureate of national and international competitions Oleg Krimer (piano); the concert master of the Bonn Symphony Orchestra, Alexander Lifland (violin); the laureate of the international singing competition in Murcia, Spain, Tatiana Konig (soprano), the laureate of German Bundeswettbewerb competition Likas Wittrock (cello), who will perform the most popular compositions, not leaving a single listener unimpressed.