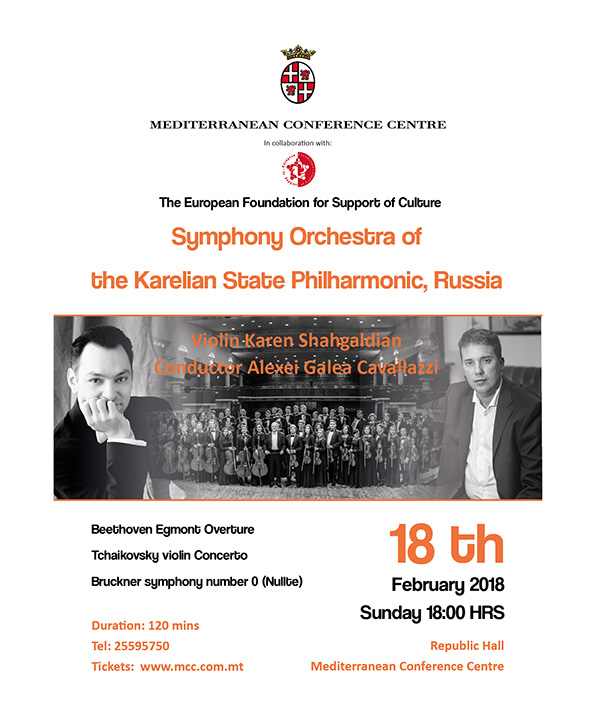 The European Foundation for Support of Culture, jointly with the Mediterranean Conference Centre and the Ministry for Education and Employment of Malta, plan to organize a concert tour of the Karelia Symphonic Orchestra in Malta.

The Symphonic Orchestra of the Karelia
Philharmonic Society is amongst the oldest
and well-known music ensembles of the
North-West Region of Russia. In 2018, the orchestra
will turn 85 years old.
On February 18 and 19, the Orchestra will perform at
the Republic Hall of the Mediterranean Conference
Centre, the most prestigious concert hall of Malta
with Alexei Galea Cavalazzi (Malta) conducting
and Karen Shakhgaldyan (Armenia), performing
as the solo violinist. The programme will include
Beethoven’s Egmont Overture, Tchaikovsky’s Violin
Concerto and Bruckner’s Symphony No. 0.
It is noteworthy that some 600 students from a
multitude of Maltese schools will make up the bulk
of the audience at one of the performances, and it
is hoped that the experience will encourage their
interest in, and pursuit of, classical music in the
future. EUFSC endeavours to include an educational
component into concert series and events and this
is just one example.