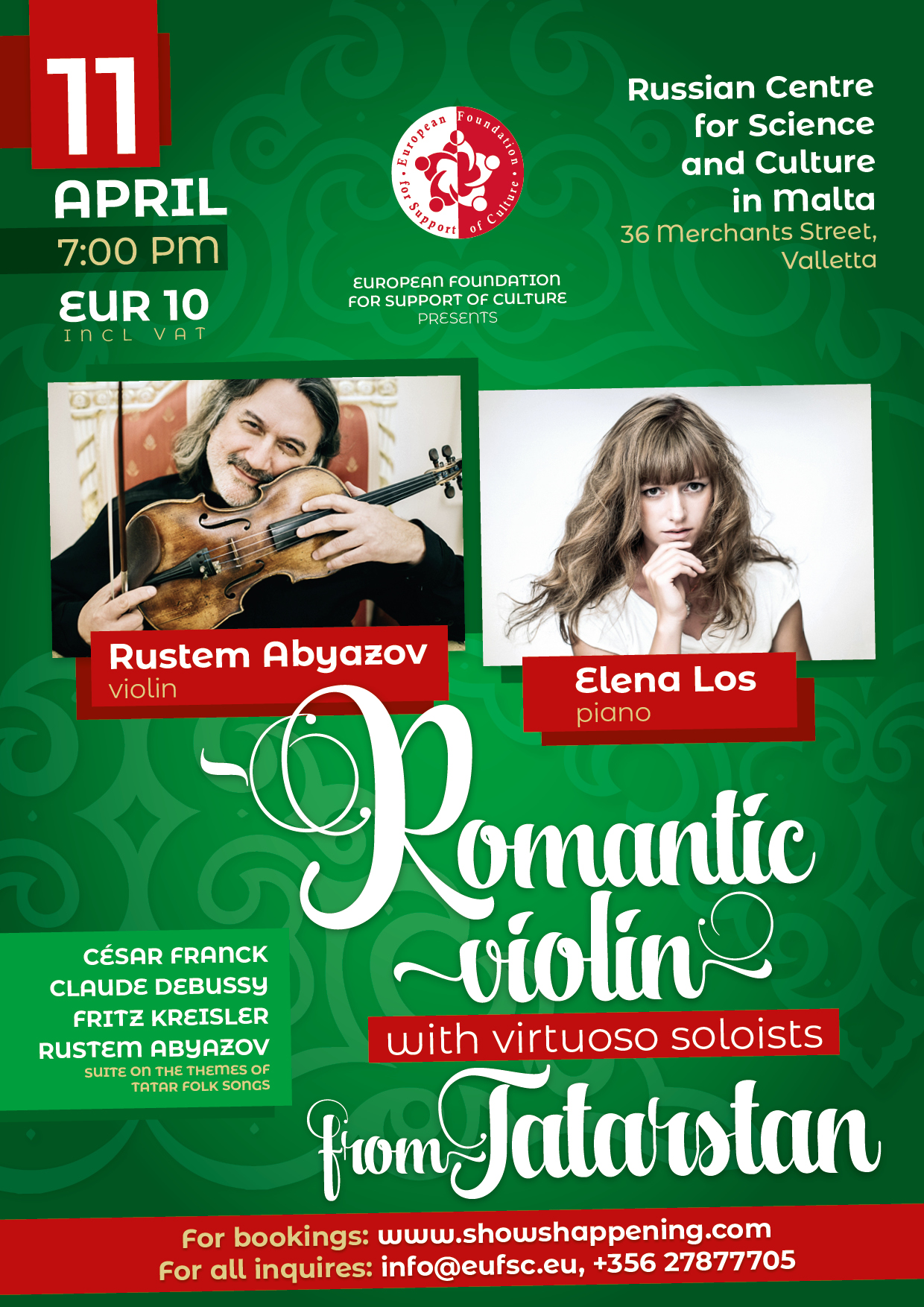 From 8 to 11 April, the European Foundation for Support of Culture held the “Days of Tatarstan” in Malta.” The unique project  included lectures on history, culture, and the arts by professors from leading Russian universities. The project  also featured Russian ensembles performing the Republic’s national dances, a national costume exhibition and concerts of Tatar national music.

A concert featuring the founder, permanent artistic director and chief conductor of the Kazan chamber orchestra La Primavera, famous violin player Rustem Abyazov and international piano competitions winner, soloist of the Kazan chamber orchestra La Primavera Elena Los was held at the Russian Centre of Science and Culture in Valletta as part of the project. This concert was a true gift to Malta during the Days of Tatarstan.

This is an anniversary year for La Primavera, as Tatarstan’s best-known orchestra turns 30 and its long-time head maestro Abyazov turns 60. To mark these momentous occasions, the orchestra and its individual musicians have been giving celebratory concerts around the world, introducing connoisseurs of classical music to the national music of Tatarstan.

Rustem Abyazov holds the titles of the Merited Performer of the Russian Federation and of the Republic of Tatarstan, People’s Performer of the Republic of Tatarstan, Winner of the Gabdulla Tuqay State Prize; he was declared Conductor of the Year by the Musical Reviewall-Russia newspaper in 2002. He graduated from the Moscow and Kazan Conservatoires, specialising in the violin and composition. As a soloist and conductor, he has recorded and released 31 CDs. The works he composes are published, performed and broadcast on radio and TV.

Maestro Abyazov participates in many international festivals, he is the founder and artistic director of the Abyazov Festival, L’arte del arco, Clio’s Chariot: Musical Pages in the Region’s History, Thou, Mozart, art a God, and of the Ten-Year Brotherhood and Stars from Tomorrow projects.

The conductor focuses particularly on expanding the repertoire for string orchestra. He is the author of over 500 arrangements and orchestrations, a large part of them of works by Tatar and Bashkir composers and folk songs.

At the 11 March concert, Rustem Abyazov and Elena Los gave the premiere performance in Malta of a Suite based on Tatar folk songs. The event was expected to be attended by high-ranking officials, including the Ambassador of the Russian Federation to the Republic of Malta.