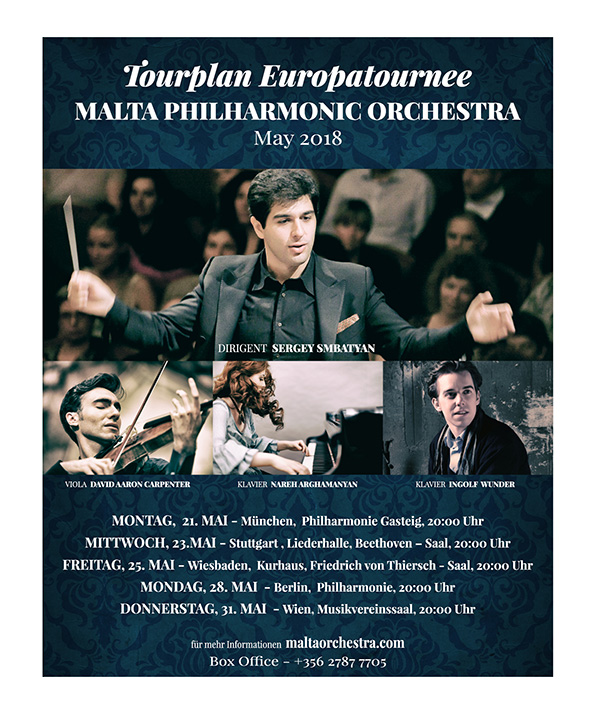 From May 19 to May 31, the Malta Philharmonic Orchestra (MPO) was on a tour in Europe as part of celebratory activities connected with its 50th anniversary and highlighting the status of Valletta as the European capital of culture for 2018. Concerts will be held in Germany, Austria and Malta. The project is initiated and implemented by the European Foundation for Support of Culture. MPO was formed in April 1968 and it brought together the cream of the cream of Maltese and European musicians. MPO enjoys great public appreciation, giving over 70 performances each year at various concert venues across Malta. Despite its busy concert schedule in Malta, the orchestra often goes on foreign tours, performing music in the best concert halls of China, Italy, Germany, Austria and Belgium. The tour programme included performances of the orchestra in the following concert halls and cities: the Mediterranean Conference Centre (Valletta), Gasteig Cultural Center (Munich), Liederhalle (Stuttgart), Kursaal (Wiesbaden), and Berlin Philharmonic (Berlin), Musikverein Centre for Classical Music (Vienna). Among the soloists who performed with the orchestra during the European tour, were such known artists as Nareh Arghamanyan (pianist from Armenia, winner of the Montreal International Piano Competition) and Ingolf Wunder (pianist from Austria, prize-winner of many international competitions, Deutsche Grammophon artist). In addition, each concert was graced by participation of a special guest – David Aaron Carpenter, well-known violist from US. The Malta Philharmonic Orchestra was led by famous conductor Sergey Smbatyan, merited artist of the Republic of Armenia. Works of known Maltese composers were performed. International TV channels and news agencies such as Medici, Mezzo TV, TVM and others covered the concert tour.