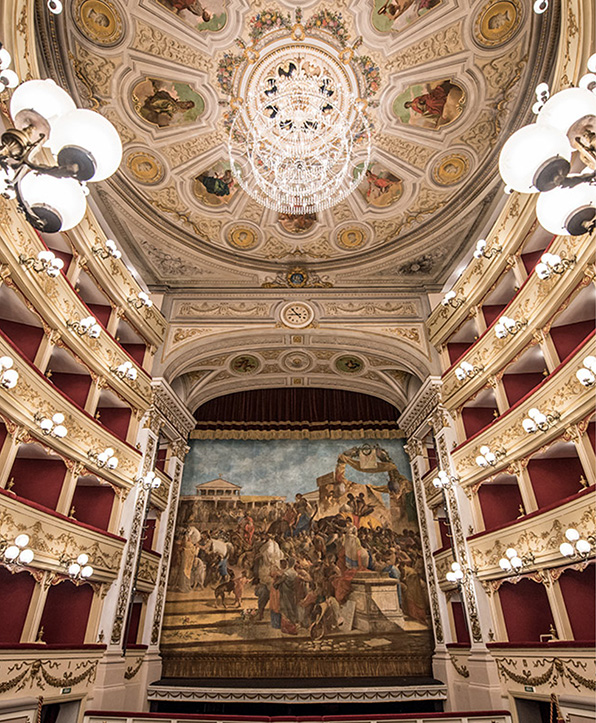 This year, the famous Marrucino Theatre (Italy) is turning 200 years
old. To mark this occasion, the European Foundation for Support
of Culture together with the Ministry of Cultural Heritage and
Activities and Tourism of Italy, the Abruzzo Regional Council and the
Chieti Province Government, are organizing a commemorative series of
classical music concerts.
The Marrucino Theatre was opened in 1818 in the heart of the town of
Chieti and was originally known as the Royal Theatre San Ferdinando.
The building of the theatre is a historic landmark of the Abruzzo Region.
Over the years, the exterior appearance of the theatre went through a
number of substantial changes. In 1872, engineer Luigi Daretti, was
commissioned by the municipal government to redevelop the theatre; a
gallery and stairs to access balconies were added. Following that, architects
Giovanni Vecchi and Enrico Santuccione, renovated the main auditorium
changing its historic square-like shape for a semicircle. Later, the ceiling
of the auditorium was adorned with a specially designed round element
divided into eight sectors, each sector being decorated with an allegorical
picture of female figures symbolizing theatre, art and music.

The celebratory series of 13 concerts to mark the 200th anniversary of the theatre will be held from February 17 through June 6 on the Marrucino’s principal stage. World renowned artists, prize-winners of international competitions, professors of European conservatoires and chamber and jazz ensembles will perform.