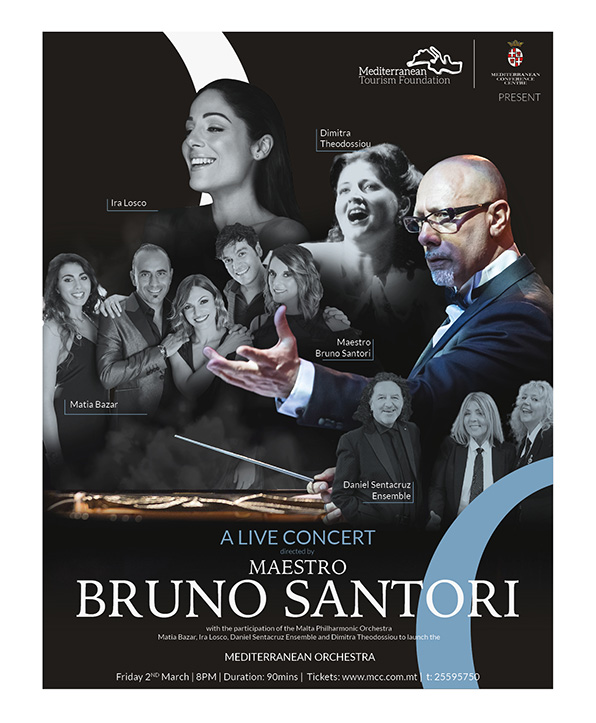 Konrad Mizzi, Minister of Tourism for Malta, says that the key driver for the creation of such an orchestra is the desire to make the Republic a major centre on the Mediterranean musical map.

Maestro Bruno Santori, artistic director and president of several prestigious European
competitions and festivals and visiting conductor of renowned theatres of the world, is to be
the director of the Mediterranean Orchestra. In 2017, the conductor/composer was designated
as the “Malta Ambassador of Tourism’.
In this regard, the Mediterranean Tourism Foundation together with the Malta Tourism
Authority, European Foundation for Support of Culture, Malta Philharmonic Orchestra and
the Mediterranean Conference Centre, is organizing the Mediterranean Music Festival in
Malta to last from March to December 2018.
The debut performance will take place on March 2 in one of the most historic concert halls
of Europe – the Mediterranean Conference Centre. The orchestra will share the stage with
famous artists: Maltese singer – Ira Losco, finalist of the Eurovision contest; soprano –
Dimitra Theodossiou, Opera Oscar Prize winner, opera diva performing on stage of such
famous theatres as the Royal Opera House Covent Garden and La Scala; popular pop group –
Matia Bazar, participant of international festivals and popular Italian group – the Daniel
Sentacruz Ensemble.
Attendance of VIPs, representatives of ministries, ambassadors of Mediterranean nations,
patrons of art and members of the international media is expected at the event.