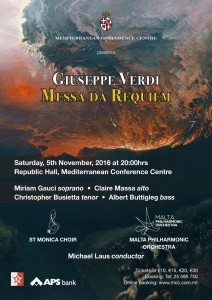 Verdi’s dramatic and spectacular setting of the Mass for the Dead, written to commemorate the death of another great Italian, Alessandro Manzoni, will be performed by international and Maltese soloists, the St Monica Choir and the Malta Philharmonic Orchestra, under the baton of Michael Laus, in what promises to be an unforgettable evening.  The vocal soloists include internationally-renowned Maltese soprano Miriam Gauci and tenor Christopher Busietta who sang in the MCC performance of Anton Nani’s Responsori in March 2016.

Tickets are available on: www.mcc.com.mt .