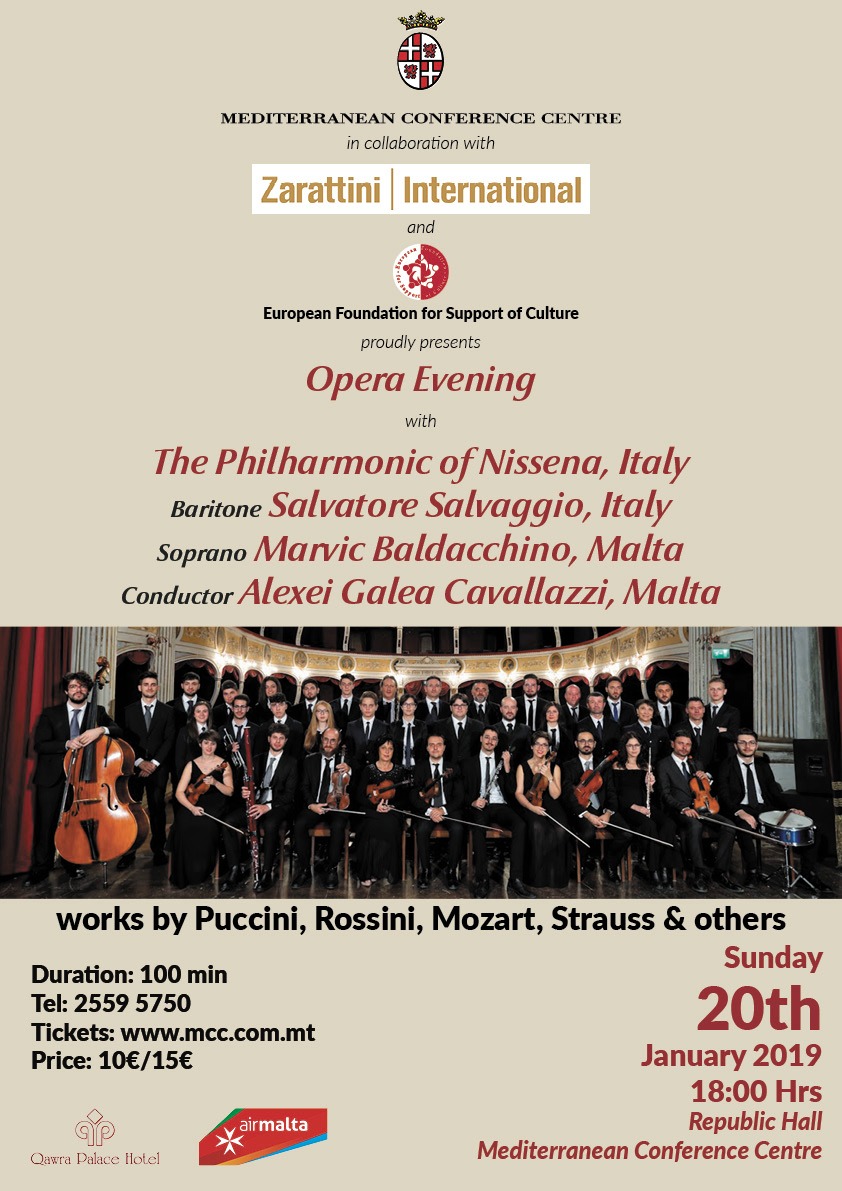 On 20 January, the European Foundation for Support of Culture, together with the Mediterranean Conference Centre and Zarattini International Limited,  held an Italian Opera Evening. The Maltese soprano Marvic Baldacchino, who graduated from Edinburgh Napier University, and the Italian baritone Salvatore Salvaggio, who graduated from the Vincenzo Bellini Conservatoire (Caltanissetta), supported by the Filarmonica Nissena Siciliana,  performed at the concert, with Alexei Galea Cavallazzi (Malta), who graduated from Oxford University and Moscow State Conservatoire, conducting.

The Filarmonica Nissena Siciliana was founded in 2008 and is made up of Sicilian musicians collaborating with Italy’s preeminent orchestras.

Over the ten years since its inception, the orchestra has given over 100 concerts in Sicily, playing works ranging from Baroque to opera to pop music. Since 2008, conducted by its Principal Conductor Luigi Sferrazza, who is also its artistic director and concertmaster, the orchestra has performed at major international festivals in Sicilian big cities and participated in all the island’s concert seasons.

In August 2011 and 2012, the Filarmonica Nissena Siciliana was the invited resident orchestra at “Le Belliniadi”, a prestigious festival in Catania. The orchestra shared the stage with such world-renowned musicians as Dmitry Berlinsky, Winner of the Paganini Competition, the clarinetist Ints Dalderis (Latvia), Arkadij Zenziper, Professor at the Carl Maria von Weber College of Musicin Dresden (Germany), Andrey Dogadin, Professor at the Rimsky-Korsakov St Petersburg State Conservatoire (Russia), and Ilya Konovalov (Israel), concertmaster of the Israel Philharmonic).

The audiences at the Mediterranean Conference Centre were treated to arias from some of the most famous European operatic composers, such as Puccini, Rossini, Mozart, Strauss and others. The concert was  followed by a reception attended by representatives of the Italian and Maltese cultural community.