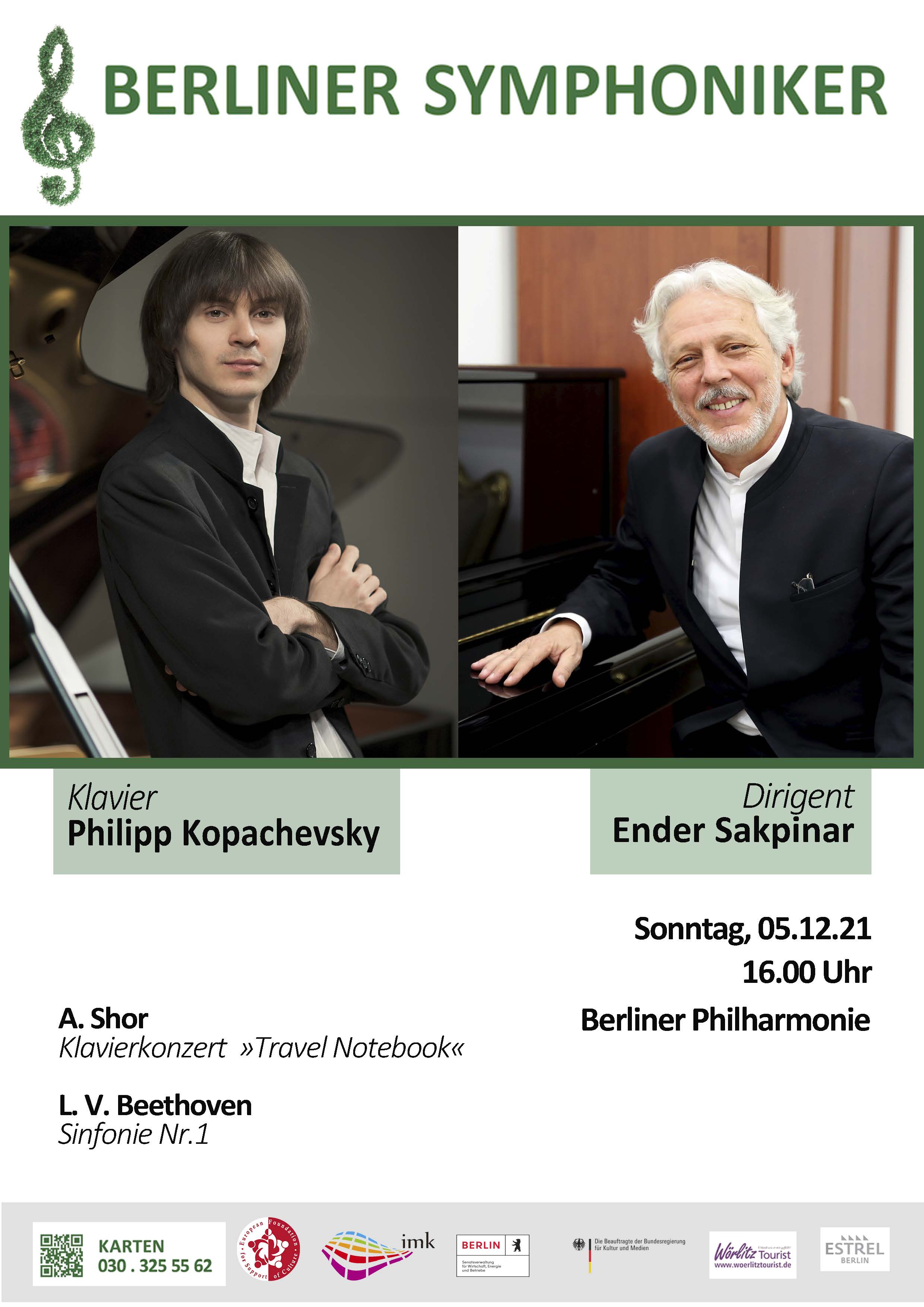 On 5th December, the European Foundation for Support of Culture will present a concert featuring Philipp Kopachevsky (piano), Kyoung-Joo Sung (violin) and Do Hee-Sun (voice) in concert with the Berlin Symphony Orchestra conducted by Turkish maestro Ender Sakpinar. The performance will take place at the Berliner Philharmonie’s Grand Hall and feature music by distinguished European Composers.

Philipp Kopachevsky is a world-renowned pianist who had already secured his position as one of classical music’s brightest young stars by the age of twenty-three. He has performed extensively both in his native Russia and overseas in countries including the Netherlands, UK, USA, Germany, France, Italy, Greece, Poland, Spain and Japan. A soloist of the Moscow State Academic Philharmonic and prize-winner of multiple international competitions, including the 10th International Franz Schubert Piano Competition (Germany), Kopachevsky has performed with many of the world’s greatest orchestras, such as the English Chamber Orchestra, Tchaikovsky Symphony Orchestra and Russian National Orchestra, and with conductors including Valery Gergiev, Andrew Gourlay,

Violinist Kyoung-Joo Sung rapidly established his place as a world-class soloist shortly after completing his studies, and is known for his virtuosic technique and profound musicality. He has won various international competitions including the Grand Prix of the Music Magazine Competition, Baroque Music Competition, Nanpa Music Competition, KBS New Musician and Sungjung Music Competitions. While studying at the University of Texas, he won the Outstanding Doctor of Music Arts Chamber Recital Award.

Do Hee-Sun is a celebrated soprano who, since studying at the Yonsei University College of Music (Seoul) and the University of Arts Berlin, has gone on to forge an impressive and prestigious career including roles in The Magic Flute, The Little Prince, La Cenerentola, Il Barbiere Di Siviglia, Rigoletto, La Traviata and La Bohème, amongst many others.

After studying composition at the Ankara State Conservatory, Ender Sakpınar completed a postgraduate course in conducting at the École Normale de Musique de Paris, with a scholarship from the French government. Sakpınar has participated as a guest at many international festivals in France, Italy, Switzerland, Malta and Turkey, including for the Omaggio a Venezia Festival in Venice broadcast live to the world on Rai 3 TV.

The Berlin Symphony Orchestra was established in 1967, following the amalgamation of the Berliner Symphonisches Orchester and the Deutsches Symphonie-Orchester. In addition to their performances at the Berlin Philharmonie, they are also regular guests at the Konzerthaus Berlin, University of the Arts, Berlin Cathedral, the Kulturbrauerei and Chorin Monastery. They have conducted tours of Europe, North and South America, Africa and Asia, and have appeared at major international festivals in France, Italy, Austria, Spain and Israel.

This concert forms part of a world tour by pianist Philipp Kopachevsky.