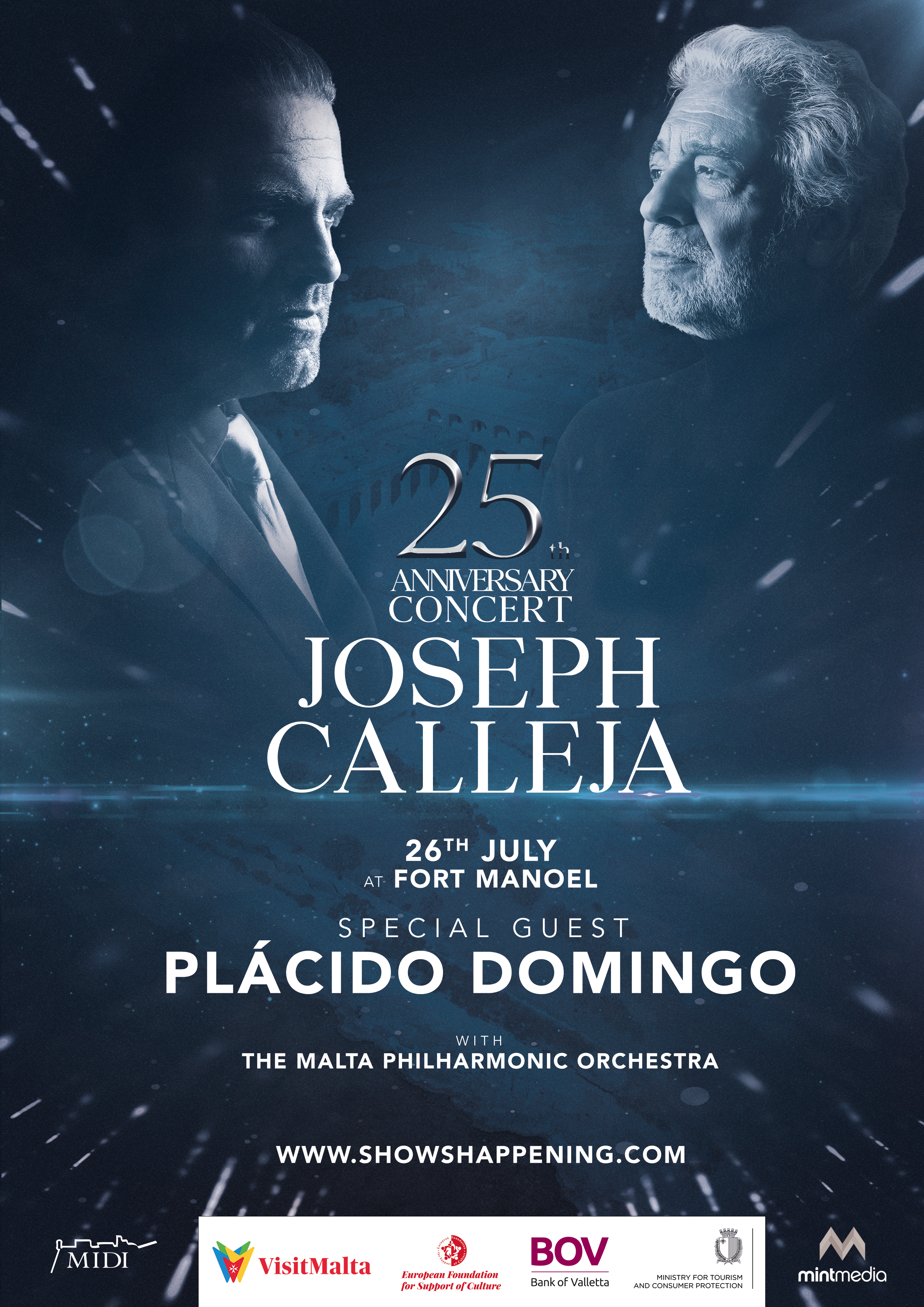 "Opera legend Plácido Domingo will be Joseph Calleja’s special guest at the Maltese tenor’s anniversary concert, which is being held in the spectacular surroundings of Fort Manoel in Malta on July 26 in honour of the 25 years that he has spent on stage"

Acknowledged as one of the finest-ever singers, Domingo has almost reached 4,100 performances in a stellar career that has made him a household name both as a tenor and a conductor.

Calleja, who has just completed the recording of his sixth album for Decca Records on the back of a critically acclaimed run in New York, said:

“The Maestro needs no introduction. His talent, stamina and love for the opera world are revered the world over and what I can promise is that this will be a concert to remember. Placido and I have sung together abroad, but to perform with him in my homeland is a dream come true. My first big break in opera came in the 1999 edition of his annual Operalia competition and I have wanted to get him over to Malta ever since.”

Domingo said: “I am very happy and proud of Joseph's beautiful artistic trajectory with his generous voice and admirable extension. I gladly welcome his invitation to participate in this concert to commemorate the first quarter century of his career! I was privileged to share the stage with Joseph on two memorable Simon Boccanegra productions and now I am thrilled at the chance of making my Malta debut with him, in his homeland!”

The Maltese tenor continues to grace the world’s leading opera houses and concert halls in his silver jubilee year which will see him perform in France, Germany, the UK and Australia among others.

Domingo, whose repertoire encompasses more than 150 roles, has continued uninterrupted his extraordinary artistic career for more than half a century and this year, after having sung in Madrid, Moscow, Paris, Palermo, Salzburg, Versailles, Buenos Aires and Budapest, he is expected to return to Italy, Austria, Germany, Japan, South Korea, Spain, Slovenia, Mexico and South America.

The fitting venue for this spectacular concert, which will also feature the Malta Philharmonic Orchestra, was originally built by the Knights in 1723 to defend Valletta under the patronage of Portugese Grand Master Manoel de Vilhena and underwent meticulous restoration thanks to Midi plc.

Joseph Calleja – 25 Anniversary Concert is being produced by Mint Media with the support of the Malta Tourism Authority, the European Foundation for Support of Culture, Bank of Valletta and Midi.

Malta Tourism Authority Chairman Gavin Gulia said: “When we speak of Maltese Cultural Ambassadors who – through their exceptional talent – give visibility to the Maltese Islands and their endless beauty, one cannot but not think of The Maltese Tenor Joseph Calleja. It gives us great pleasure, as Malta Tourism Authority to support Joseph’s 25th Anniversary Concert, which this year will be held in one of the island’s most beautiful locations, making the concert even more unique. Events such as this one continue to add versatility to the Maltese Islands, by enhancing the quality of the tourism product, reaffirming once more that there truly is something for everyone in Malta."

European Foundation for Support of Culture President Konstantin Ishkhanov said:  “The EUFSC has been collaborating with Joseph Calleja for quite some time now, both nationally and around the world, and we are always very proud and honoured to team up with him, especially for such a special occasion as this. He is undoubtedly one of the best standard-bearers of Malta’s cultural heritage, and I am certain that this event will prove, once again, to be yet another memorable triumph.”

BOV CEO Rick Hunkin said: “The Bank’s support for the annual Joseph Calleja concert encompasses Bank of Valletta’s continued support of the local arts and culture scene as part of its Environment, Social and Governance (ESG) commitment. This annual concert is back and will showcase Malta’s top talents, along with other local and international stars while a large number of children will get the opportunity to perform alongside these great artists, and for some, their first opportunity on a stage through the BOV Joseph Calleja Children’s Choir. The concert has also been an opportunity to showcase the talents of the scholars of the BOV Joseph Calleja Foundation, the Bank’s collaboration with the Maltese Tenor to assist talented local artists to fulfil their potential and become Malta’s future stars.”

Tickets are available from https://www.showshappening.com/Mint-Media/Joseph-Calleja-Concert-2022