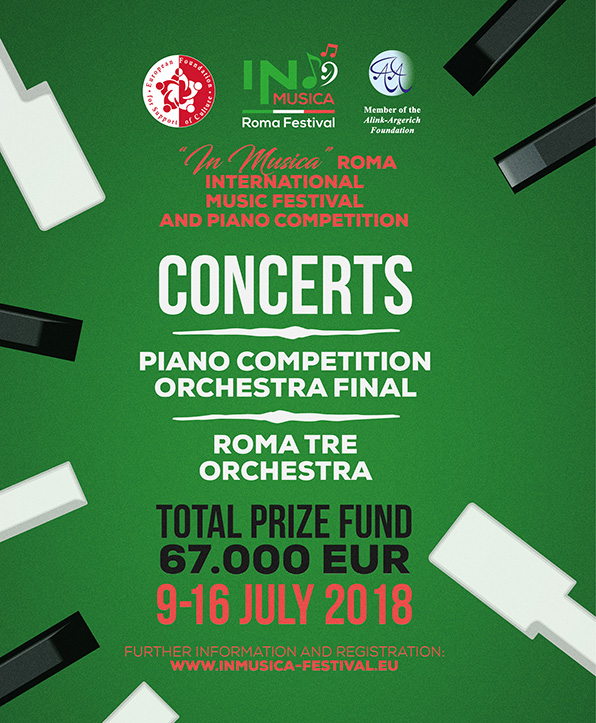 The European Foundation for Support of Culture presents the Italian festival of classical music “In Musica”, which was held in Rome from 9th till 16th of July 2018.
Rome is a unique historical place where throughout the centuries all types of world art have encountered each other and mixed together, thus creating a unique cultural atmosphere. Beauty, history, culture, art, charm, mystery, discovery… and delicious food – it is impossible to find one word to describe the capital of Italy.
The “In Musica” festival included a series of concerts by famous European musicians accompanied by the Italian Roma Tre Orchestra. The festival also housed the “In Musica” Piano Competition Rome 2018 for young pianists at the central concert venues of Rome – Teatro Argentina and Teatro Palladium.
Finalists of the competition took part in the closing concert of the festival; they have performed romantic works of the piano repertoire and music of Maltese composers accompanied by orchestra. All rounds of the competition were opened to the public who had a unique opportunity to observe the competitiveness and development of the new generation
of pianists, who came from all over the world to gain valuable experience
and universal recognition and compete for the prize money of 67 thousand
euros, the biggest prize fund in the history of piano competitions in Italy.
Among members of the jury were renowned professors of the world’s
leading music schools, as well as famous conductors and pianists.