European Foundation for Support of Culture supported by the Russian Centre for Science & Culture and under the distinguished patronage of the Embassy of the Russian Federation to the Republic of Malta is launching a new project in October 2016 – “Russian Classics” Concert series.

The first concert in the framework of the series will be hosted by the Embassy of the Russian Federation. The Russian pianist and Professor Yuri Didenko will present his solo program. 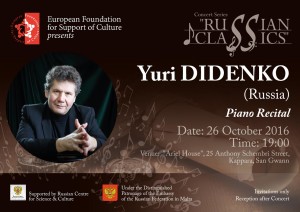 Classical music concerts on a regular basis in different prestigious venues in Malta and Gozo will be considered a wonderful creative platform for all talented musicians from Russia and Russian-speaking compatriots in Europe. These concerts are aimed at strengthening of friendly relationships between Russia, Malta and other European countries, mutual respect and cultural enrichment.