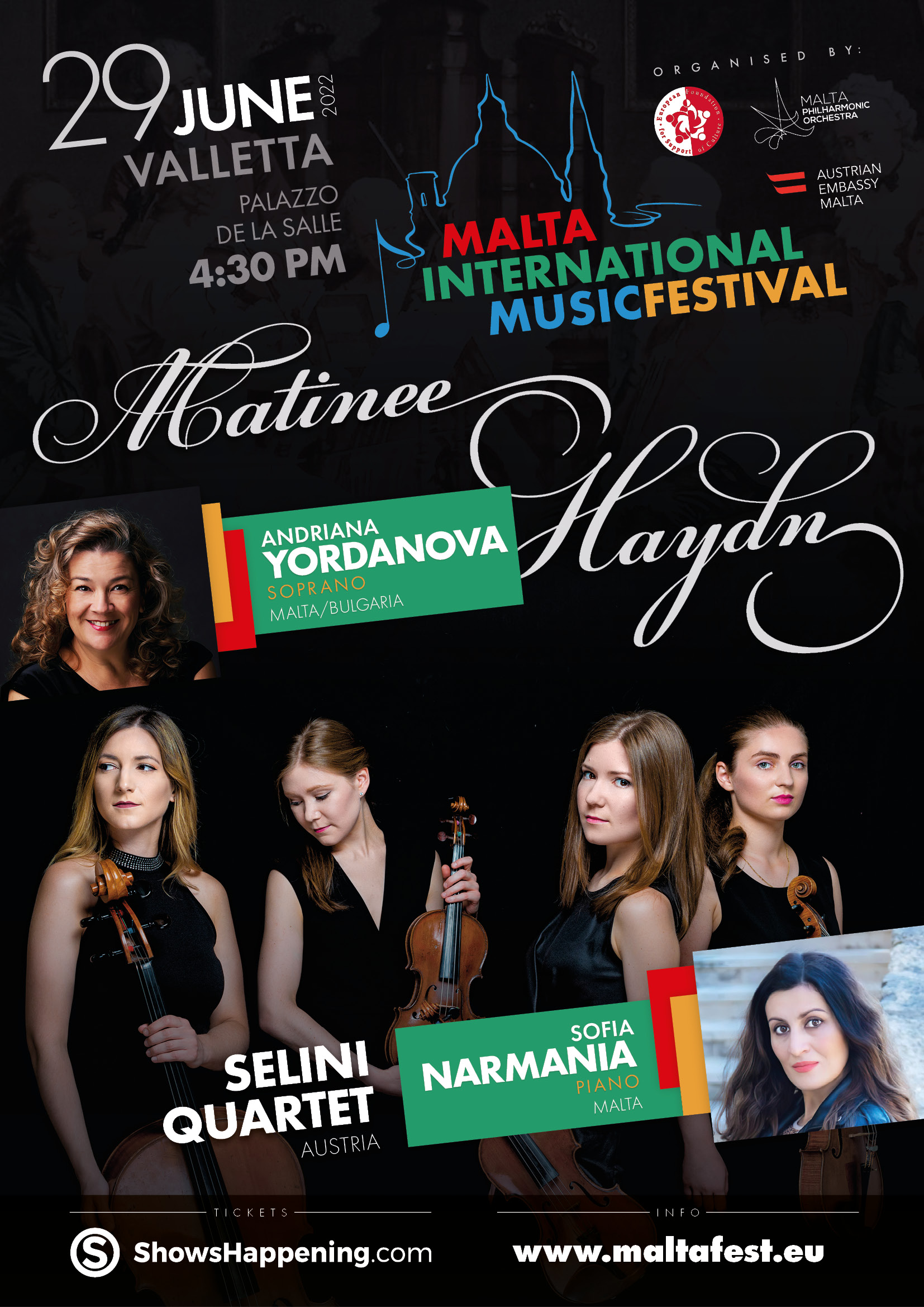 On the 29th of June 2022, the European Foundation for Support of Culture, in collaboration with the Malta Philharmonic Orchestra, will present a special daytime concert in celebration of the 290th anniversary of the birth of the renowned Austrian composer, Joseph Haydn.

Taking place as part of the 2022 Malta International Music Festival, this celebratory event will see the world-famous Selini Quartet perform at the opulent Palazzo De La Salle in Valletta, putting forward a programme dominated by the works of Haydn as they team up with the acclaimed Maltese-Bulgarian soprano Andriana Yordanova and Maltese pianist Sofia Narmania.

The two soloists will start off proceedings with a rendition of Gabriel’s aria, entitled Auf starkem Fittiche, from Haydn’s oratorio Die Schöpfung (The Creation). Composed between 1797 and 1798, this work narrates the Biblical story of creation, as it is told in the Book of Genesis, and is widely considered to be one of Haydn’s masterpieces, maintaining an enduring appeal ever since it was first performed in Vienna in 1799.

Next, the Selini Quartet will interpret what is perhaps one of Haydn’s most important and influential works, his String Quartet Op. 20, Nr. 5. Forming part of a group of six string quartets which revolutionised the genre, introducing new compositional techniques that would go on to dominate the medium for decades on end and earning Haydn the honorary title of "father of the string quartet", this piece exemplifies all that is special about these compositions, showcasing equality between each instrument which was unheard of at the time, as well as an unprecedented richness of expression, not to mention liberal use of counterpoint to an extent which had been absent since the days of the Baroque.

Yordanova and Narmania then return to present a series of voice works from the pen of the prolific Classical composer, starting with A Pastoral Song, also known as Shepherd’s Song, from Haydn’s 1794 collection, ‘12 English Canzonettas’, followed by Des Geistes Gesang (The Spirit’s Song), Die Liebe trug sie stumm (​​She never told her love), Un tetto umil (A humble roof), and Pensi a me (Think of me).

Finally, the Selini Quartet will return to close off the concert with Austrian composer Hugo Wolf’s Italian Serenade, a short, uplifting piece written in 1887 which was partly inspired by a work from the German Romantic poet Joseph Eichendorff that depicted a young wandering youth seeking freedom and adventure, with this sense of carefreeness and exuberance being perfectly encapsulated in Wolf’s music.