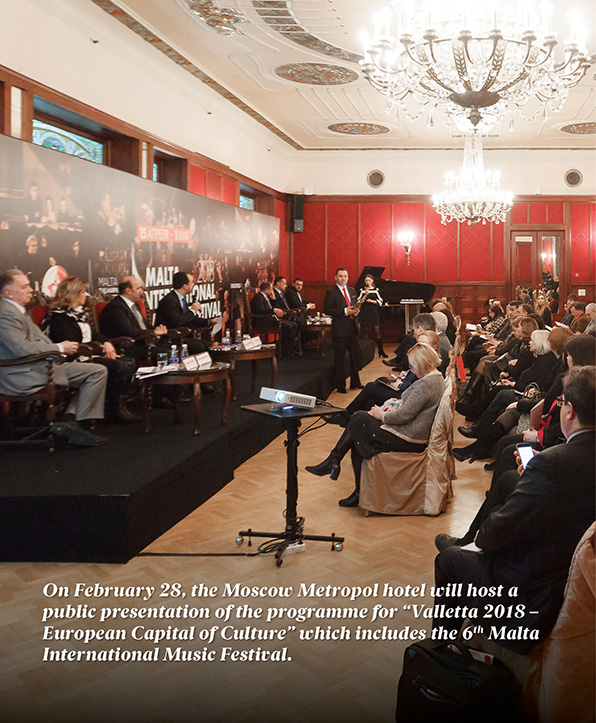 Valletta, the capital of Malta, which is almost 500 years old, was
selected to be the European Capital of Culture for 2018. In 1980, the
historic centre of the city was listed as a UNESCO World Heritage
Site. There are no less than 300 architectural monuments in Valletta. Each
year, about one million tourists come to Malta to visit the historically
important sites. 2018 will be no exception.
The 6th Malta International Music Festival, the programme of which is
organically intertwined into the calendar of cultural events of Malta,
will be held in the capital of the Republic – the city of Valletta – from
April 15 through to May 1, 2018. The European Foundation for Support of
Culture, as the principal organizer of the Festival, together with the Malta
Philharmonic Orchestra, pursues an ambitious objective of turning the
capital of Malta into a major European centre of classical music.
A host of renowned musicians have been invited to attend, including
classical music stars such as pianists G. Sokolov and N. Lugansky, violinist
M. Vengerov and others.
The press conference will be attended by Konstantin Ishkhanov, President
of the European Foundation for Support of Culture; Jason Micallef,
Chairman of the Board of Governors of the Valletta 2018 Foundation;
Alexander Sokolov, Rector of the P.I. Tchaikovsky Moscow State
Conservatory; Sigmund Mifsud, Chairman of the Malta Philharmonic
Orchestra; Alan Chircop, Artistic Director of the European Foundation
for Support of Culture; Lionel Gerada, Senior Official at the Malta Tourism
Authority; and the famous opera singer – Luba Kazarnovskaya.
In addition to a heavy presence of members of the press from Russia, Malta
and Armenia, the presentation is expected to attract representatives of
major tourist agencies from various countries, members